Catholic priests don’t generally have children. But Father Chris Riley has around 45,000.

They’re some of the toughest kids in the country, too. Boys who’ve been in trouble with the law. Girls who are violent. Youngsters who take drugs. Children as young as nine who sell themselves on the streets.

They’re kids who’ve been abused by everyone they’ve ever loved, kids who’ve given up their dreams of having a decent life, and kids on whom everyone else has turned their backs.

Yet Father Chris never turns any child away. “How can you give up on a kid?” he asks, baffled. “You can never give up on them. There’s always hope. There’s no such thing as a bad child.”

Mean Streets, Kind Heart is Father Chris’s story, the touching story of a boy who grew up with the dream of helping Australia’s forgotten streetkids, the stirring story of a man who has dedicated his life to giving a second chance to those children who have nothing, and the inspiring story of one of the country’s most admired, and loved, public figures whose simple courage and determination have led to astonishing victories, time after time, against all the odds.

As a young man, Father Chris rode his horse around the streets of Sydney’s Kings Cross, providing food for homeless children. Now he runs 20 projects through his national Youth Off The Streets charity, from farms in the country to a detox centre, from schools to refuges, from mentor programs to food vans.

Along the way, there have been plenty of tragedies along with the triumphs, heartbreak as well as stunning successes, but always Father Chris’s courage, and faith in kids to beat their problems and prosper, has remained unshaken.

With a foreword by former Australian Governor General Sir William Deane, and written by Sue Williams, this has been described is one of the most heart-warming and moving reads of the year.

Mean Streets, Kind Heart: The Father Chris Riley Story was published by HarperCollins, March 1 2003, rrp A$29.95, and was reprinted five times in the first three months of publication

A percentage of proceeds from the book go to Father Chris Riley’s Youth Off The Streets charity.

Available from all good bookshops.

Mean Streets, Kind Heart: The Father Chris Riley Story was published in March 2003, spent nine weeks in the best-sellers list and was reprinted five times in the first three months of its release.

This story is hugely impressive. It takes an exceptional person to withstand the long hours, emotional demands and bureaucratic red tape that can exhaust even the most well-meaning in welfare work.
— Tim Costello, Sydney Morning Herald, 05.04.03

Truly amazing life stories are not the exclusive province of the famous. The story of Father Chris Riley, radical Salesian priest and the man behind the Youth Off The Streets charity, is genuinely remarkable.
— Saturday Age, 15.03.03

With streetkids in Australia battling so much horrendous abuse and hardship, every second chance they receive is priceless.
— Australian Financial Review 01.03.03

Williams reveals a man who is passionate and uncompromising in the pursuit of his mission to help kids who’ve never been given a chance. And in telling the story of how Riley built up a national organisation that now runs 20 projects, from food vans to farms, refuges and a detox centre, Williams also relate the moving, often heartbreaking tales of some of the thousands of young people who exist at the very fringes of society.
— marie claire magazine, April 2003

His story is at once heart-breaking and inspirational and ultimately, full of thousands and thousands of happy endings and quite a few unhappy endings as well.
Newcastle Herald 15.03.03

It’s a story of modern Australia: sometimes sad and shocking, often heartwarming and uplifting, frequently funny, but always incredibly inspiring. And it’s worth making the journey with him.
Better Homes and Gardens, April 2003

Fr Chris Riley’s biography is a story of hope, faith and charity. It’s sometimes a life of severe disappointments, but the successes make everything worthwhile.
— Herald Sun 03.05.03

Sue Williams has an enviable facility with words and has written a most moving biography.
— The Catholic Weekly, 22.06.03

Behind the triumphs and the tears is Father Riley’s inimitable humour, his sense of fun, and the indomitable spirit that has recharged so many of the kids he has helped.
— Dymocks, March 2003 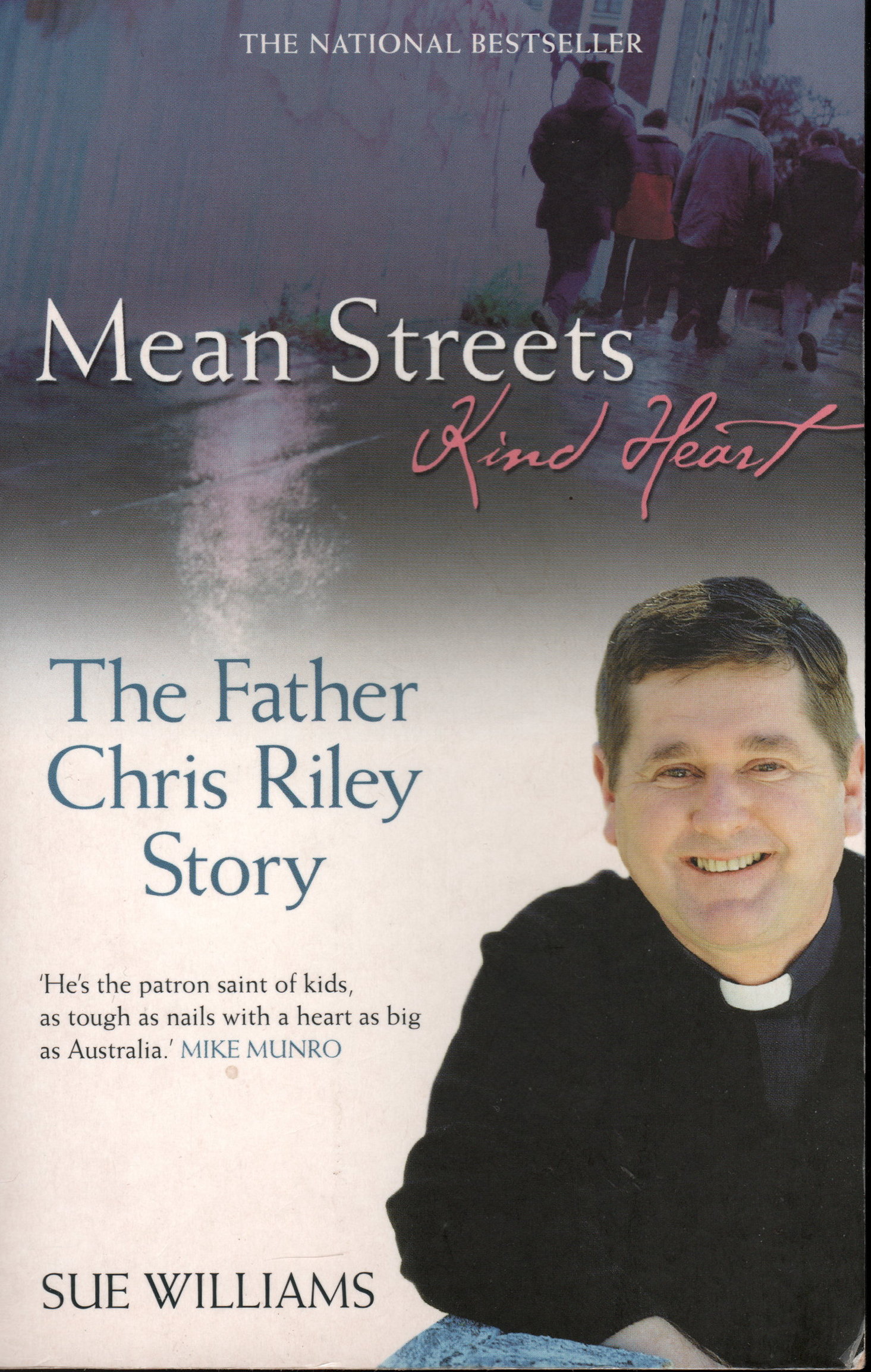