No Time For Fear

‘I grew up loving the sea – but was always scared of sharks. Always. Being in the sea is, to me, the closest anyone can get to being part of nature. Being in the sea in the vicinity of sharks is an ominous reminder of how brutal and unforgiving that nature can really be.’

Whether it’s an intense horror or a niggling fear, most Australian beachgoers have had thoughts of a lurking grey shadow with a mouthful of razor-sharp teeth while out enjoying the ocean.

Navy diver Paul de Gelder was attacked by a bull shark in the early hours of February 11 2009, while on a training exercise in Sydney’s Harbour, losing a hand and part of one leg.

But it didn’t take his spirit. After nine weeks in hospital, opting to have the rest of his leg amputated and putting himself on a gruelling rehab schedule, Paul was back in the water within months without fear of the beast that had tried to make him its breakfast?.

His life up to the attack had already been a pretty wild ride, escaping suburban Canberra for a drug-and-alcohol fuelled stint working in Brisbane strip clubs and performing as a rap artist, then an unlikely career move: joining the Army.

Paul drew on all the lessons of his past to reclaim his future; his determination to get his life back garnered by the disciplines of ten years in the defence forces, in constant exercises going “out bush”, on Army operations, on the tough diver selection test and demanding workloads. He coped incredibly well with the loss of his limbs but had to deal with the pain of rehab, and the ongoing frustrations of phantom pain.

Nothing can really prepare you for surviving and recovering from a shark attack, but Paul got himself through in record time. He refused to take no for an answer at every stage of his rehab.

In the defence forces, Paul was inspired by the US Marines unofficial mantra: improvise, adapt and overcome. He didn’t know how important that mantra would become in his survival and believes that if other people can draw strength from his life, then it’s worth talking about.

Today, as the strength of his body grows to match that amazing strength of will, Paul sets himself higher goals. The ultimate, to get back to exactly where he was before the shark attack: going on the toughest overseas ops as a navy clearance diver.

Paul was the subject of an Australian Story www.abc.net.au/austory/ and his book will also be available in the US from April 2012.

No Time For Fear: How a shark attack survivor beat the odds by Sue Williams and Paul de Gelder was published by Penguin in May 2011, rrp $29.95

““No Time For Fear is a very inspirational autobiography about an amazing buy. It’s a great book and truly inspirational.”
The Fringe Magazine

“Amazing strength and courage. One of the real heroes.”
The Courier Mail, Brisbane

“His motto is ‘improvise, adapt, overcome’, and that is what he has done in rebuilding his life.”
ABC Life Matters

“Paul is very frank, a natural storyteller .”
The Reading Room 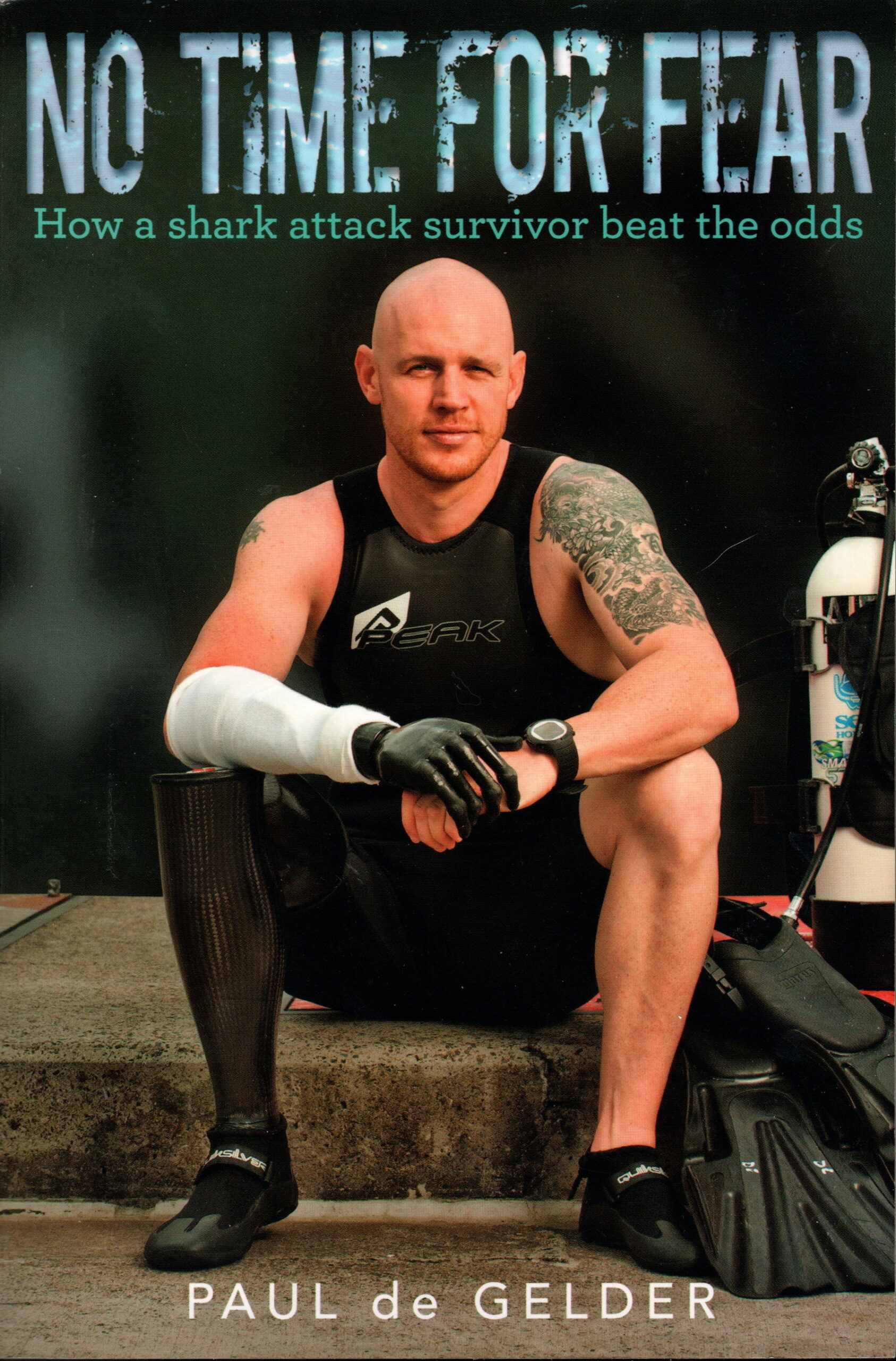