Cheryl flies sick patients from rural areas to emergency medical treatment in Queensland’s cities; Sue is often the only one between life and death for her patients in the Kimberley; Ricky trades city comforts to connect with kids through sport in remote communities in Western Australia and the Northern Territory, Marian has given up city-living to look after kids on an isolated property in NSW, while Eileen overcomes great challenges to protect remote land in South Australia for generations to come. These are some of the characters who embody the spirit of the Outback – and whose stories are touching, heart-warming and inspiring in turn.

For where there’s need in the Outback, there are many ordinary people who, against seemingly insurmountable odds, are always ready to help out those inhabiting Australia’s vast untamed frontiers. In the true Outback traditions of mateship, resilience and generosity no task is too great and no sacrifice too much for these everyday heroes. With a foreword by Australian Governor-General, Her Excellency Ms Quentin Bryce, this is a book that brings the Outback into everyone’s sitting rooms.

Outback people just get on with the job, with plenty of humour and little fuss,” she writes. “Although most Australians today live close to the coast and in the big cities, I like to think that we stay connected in some sense, real or spiritual, with the great red deserts, the bare brown lands dusted with mulga and Mitchell grass, and the people who’ve made the Outback their home.”

Each story is like watching an episode of the ABC’s Australian Story – and it’s hard not to be captured by every one of these inspirational tales. Williams presents a fascinating cross-section of people working in the outback community …these unsung heroes can make an enormous contribution to people’s lives.
-Candice Cappe, National Library of Australia, Canberra, September 2010

A resident of one of Sydney’s most densely populated suburbs, English-born Sue Williams hardly seems an ideal candidate to write about life in the Aussie bush, but that’s only to those who haven’t picked up one of her books. Sue’s understand and respect for those who live on the land is conveyed in her eye for detail and ability to tell good, uplifting yarns. Her previous book Women of the Outback, was … bought by the ute-load, and no doubt this release will do the same … Colourful and inspiring stories.
– Outback magazine, Oct/November 2010

Following the success of her collection of true stories Women of the Outback, Sue Williams returns to Australia’s regional and remote areas to meet 16 extraordinary men and women. Williams presents a fascinating cross-section of people working in the outback community. Some are facing their own life challenges; others are devoting themselves to people in need.
– Australian Bookseller & Publisher magazine, September 2010

Author Sue Williams has found some real gems nestled in the Australian outback, locals who have spent their own lives changing the lives of others. In this entertaining and inspiring collection of profiles, 16 Australians and their achievements are documented, the tales told with flair.
-Weekly Times, 23 November 2010

A collection of inspiring true stories about ordinary people who, against the odds, help out those less fortunate.
-ABC Radio, September 16 2010

With a foreword by Governor-General Quentin Bryce, Outback Spirit tells stories of bravery and community excellence in our most remote areas …Williams travelled all over our wide brown land in pursuit of a fine collection of stories embodying those qualities.
-Toowoomba Chronicle, December 4, 2010

Living in the extreme conditions of the outback takes tenacity, sacrifice, resilience and a heightened sense of mateship. Indomitable.
-Shepparton News 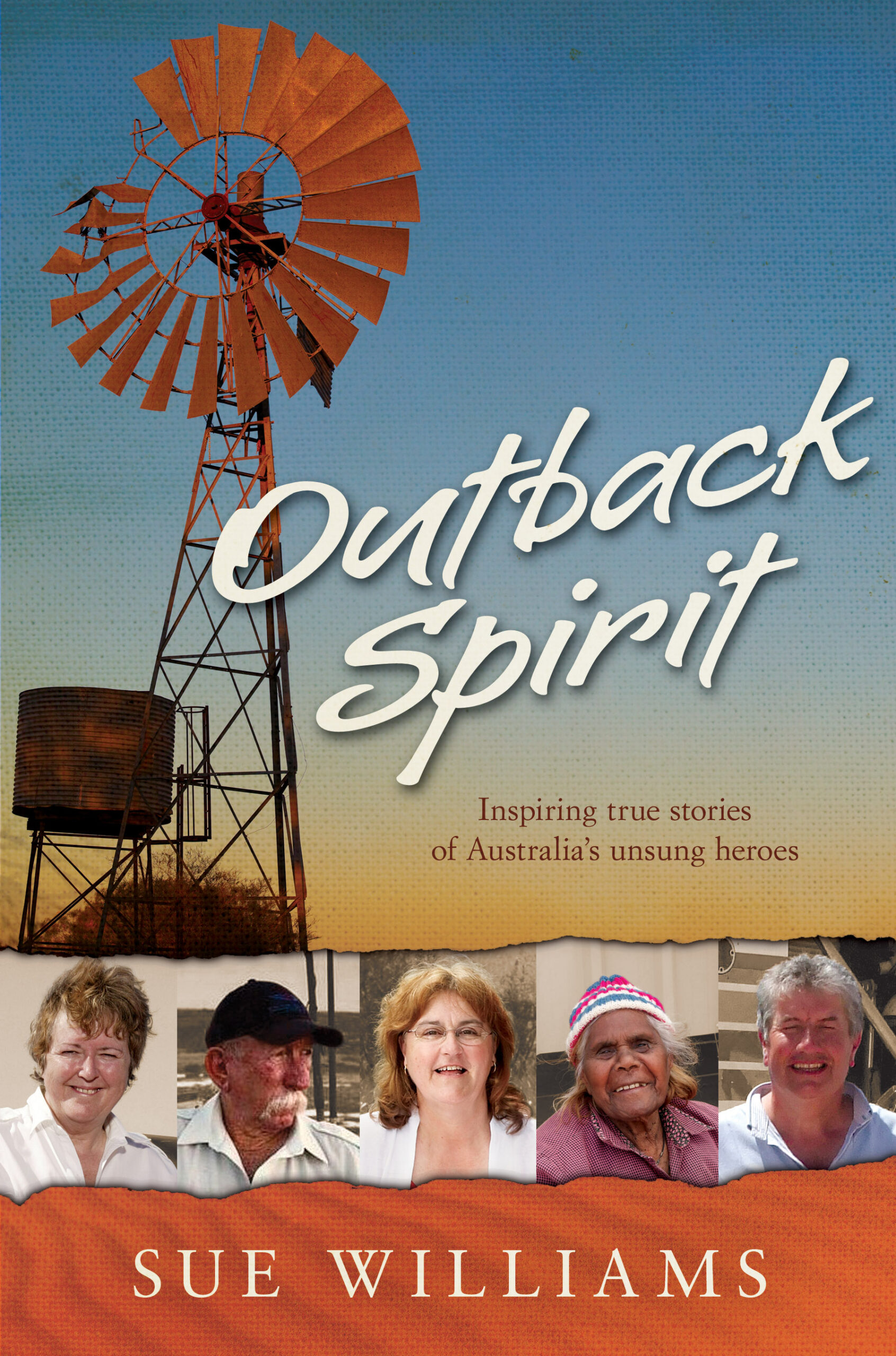