Welcome to the Outback

The tall woman in jeans, chequered shirt and a huge cowboy hat looks me up and down. ‘Hmmm,’ she says finally, putting her hands on her hips and pursing her lips. ‘You haven’t ridden a horse before? Righto. Righto.’.

Award-winning journalist, best-selling author, biographer and inveterate traveller Sue Williams brings us Welcome to the Outback, a story of one woman’s determined mission to find the essence of the Australian Outback experience.

Forgoing the comfort of her inner-city Sydney apartment and the safety of her vegetarian, caffeine-free teetotaller lifestyle, Sue threw herself with characteristic gusto into discovering the heart of the Australian Outback, billy tea, damper and all. She travelled the width and length of Australia by any means possible — bus, train, campervan, horse, goat, foot, bicycle and plane.

Sue swallowed countless flies, took part in an Outback Ironwoman challenge, participated in droving 600 head of cattle through Queensland, boxed a State championship contender in Fred Brophy’s Outback fight club, helped pregnancy test cattle in remote SA, trekked the Larapinta under siege from a mouse plague, nearly got rolled by her horse and somehow managed to survive it all.

Having seen the country in drought and in flood, mixed with old drovers, grey nomads, tourists, new settlers and old-timers alike, Sue eventually realised that the heart of the Outback is defined by a shared national belief in a simpler, more genuine time.

Australians are notoriously great travellers but not in our own backyards. Welcome to the Outback is an inspiring, witty, moving and personal account of all the reasons Sue Williams found to continue her search for the ‘real Outback’.

Click on one of the frames on the right for the YouTube clips of Sue’s Outback Boxing Tent fight, her chat about the book on the TV show The Circle, Alan Jones’s interview with boxing tent showman Fred Brophy and a whirlwind video of Sue’s Outback travels for the book.

Welcome To The Outback: one woman’s search for the real heart of Australia by Sue Williams is published by Penguin on March 21 2012, rrp $29.95

“Williams, whose many books include Women of the Outback and Outback Spirit, is back on familiar territory with Welcome to the Outback – but this time, rather than writing about adventurers, she is the adventurer.
As a horse rider it’s hard to imagine someone brave/foolhardy enough to decide that as a non-rider the first thing she’ll do is a week-long cattle drive – as well as goat racing, holing up in mining towns where she’s propositioned by scary locals, and learning to box, all in her quest to determine what exactly the outback is.
As the taciturn woman at the garage in Coober Pedy says to her: ”Fruit? Got peaches … my last tin. Drink the juice ‘cos the water tastes like shit. Welcome to the outback.”
This is the first time Williams has written primarily about herself – it’s a brave move, a brave book, by a brave woman. She may not have won her fight but, jeez, she trained with the best and gave it her best shot, and even if the best fighter won on the day, she deserves a medal, I reckon.”
Candida Baker, Spectrum, Sydney Morning Herald and The Age July 2012 (Read more of this review HERE.)

“City slicker sue Williams’ latest book is based on her adventures in the Outback. We’re transported to a scene in which a frosty local realises Sue “isn’t from round here” before warming up enough to offer her some chops and a cold beer … problem is, Sue’s a vegetarian who doesn’t drink alcohol. Williams has charmed us with stories of the Outback (Women of the Outback and Outback Spirit) and her latest offering includes her taking on a 110kg female boxing champ known as Beaver in Fred Brophy’s Outback Fighting Club.”
Scott Podmore, Escape, Sunday Telegraph, July 2012

“Written in an easy-going conversational style, with lots of good-natured, self-deprecatory humour thrown in for good measure, Welcome to the Outback is a rollicking good read – sue’s encounters with grey nomads are particularly entertaining.”
Glen Williams, Woman’s Day

“Raging Belle – facing up to a pro boxer in the Queensland outback is a tough gig, but Sue Williams just rolls with the punches.”
Good Weekend magazine

“It’s always heartening to see a city slicker make an effort to see and understand the world outside urban areas. For those of us familiar with the bush, it’s good to see it through fresh eyes. Sue’s personal account of a cattle-drive, outback towns, the mining industry, station work and lifestyle and what it’s like to earn a living in small communities without resources is at times hilarious. She came across moving stories, intriguing history, stunning landscapes and some of the country’s most inhospitable places. It is evident that this woman is not without courage. Many years of backpacking overseas with some terrifying encounters would explain her sense of adventure and ability to handle tricky situations – such as finding herself mingling in possibly Australia’s most dangerous pub and surviving a gruelling seven-day trek along the Larapinta Trail during an horrific mouse plague.”
Paula Heelan, Queensland Country Life, August 2012

“For thousands of visitors, the Queensland Outback town of Birdsville is all about the horseracing. But for many locals, it’s all about new beginnings, as Sue Williams discovers during an extended pit stop.”
The Australian Way, Qantas, cover story May 2012

“Only a brave or foolish woman who would head off to some of Australia’s most blokey destinations as a vegetarian who doesn’t drink – or ride a horse or even enjoy hiking. But inner-city dweller Williams proves time and time again that she is the former, even competing in Fred Brophy’s famous outback boxing tent where righters eschew protective headgear, boxing-ring ropes and doctors on standby … An experienced journalist, Williams understands that the key to any great travel story is the people and she strikes up conversations with ageing drovers, grey nomads, townspeople, miners and fellow travellers. But it’s her wry observations that set this account apart. Port Hedland is ‘busier, dirtier, noisier, smellier, richer and mroe horrible than any other place you’ve seen’. sxhe isn’t afraid to include details not found in sleek brochures but she balances this with pure moments of appreciation.”
Rosemarie Milsom, The Sun Herald, Sydney

“Her publisher decided a few years earlier it would be interesting to see the outback through the eyes of somebody who had no idea about it, and no skills to cope with it. The result has been a series of remarkable books about the people who live somewhere out near the black stump – or beyond it.”
Tony Bartlett, AAP

“You could be forgiven for wondering if Sydney journalist and author Sue Williams has a few roos loose in the top paddock. For a start, she spent her birthday being hit around the head by a champion fighter. Then there was the time the city slicker drove 600 head of cattle across Central West Queensland, despite being unable to ride a horse. And the time she went swimming with whale sharks at Ningaloo Reef off WA. Or when she entered an outback ironwoman challenge, and got up close with an inland taipan, the deadliest snake in the world.”
Felicity McLean, Daily Telegraph

“It is an entirely worthwhile endeavour, particularly for someone who was not born in Australia, to travel with the aim of trying to make sense of the Outback.”
Bruce Elder, Traveller, Sydney Morning Herald

“Recent research has found that one in four Australians don’t ever even leave the cities. I hope this book, with its tale of extraordinary landscapes, amazing people and wonderful things to do in the Outback, lures more people out there to try it.”
Jacqueline Lang, The Starfish, Perth

“Imagine not being able to pop to the shops when you need to, or not having a hospital nearby if anythign goes wrong. Out here in Cook, SA, that’s the reality. With a population of just four – including Andrea and husband David – it’s the smallest town in Australia. In the middle of the vast Nullabor Plain, with the nearest capital city over 1000km away, Cook is not for the faint of heart! It appears in a new book, Welcome to the Outback …”
That’s Life, August 2012

“What drives a slender, middle-aged, vegetarian cityslicker to go bush for three months and take part in a boxing match against a woman who could probably knock out most men? Sue Williams wanted to experience as much of the Outback as possible when researching her latest book Welcome to the Outback, even if that meant defying the advice of just about everyone who laid eyes on her.”
Alex Cauchi, Wentworth Courier 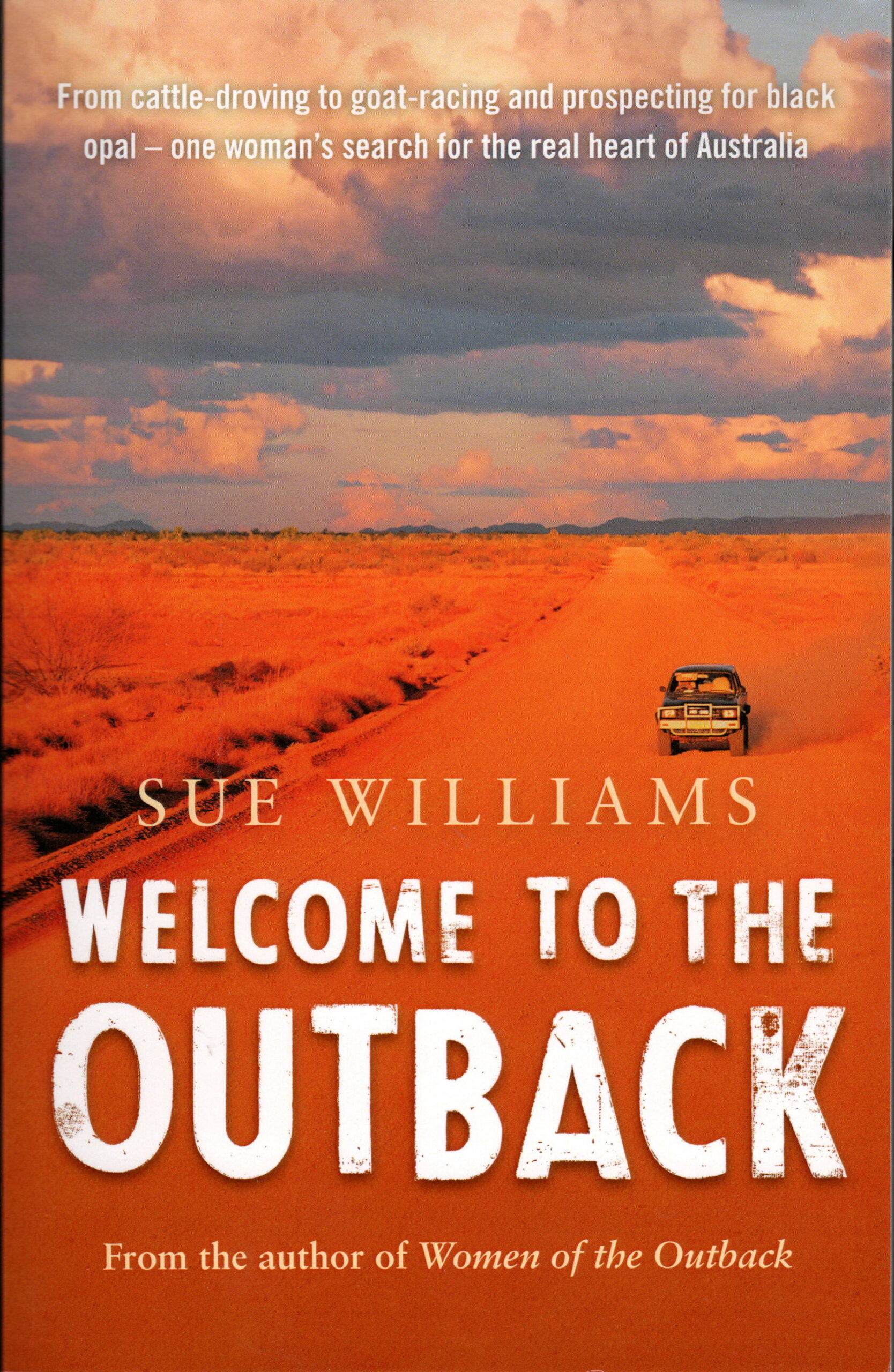