When the Boxing Day tsunami hit, Australians were moved to help in a massive outpouring of sympathy and aid. But one of the first to arrive in the worst-hit area, Banda Aceh, was Father Chris Riley, the priest renowned for his dedication to improving the welfare of Australia’s poorest kids.

Father Chris was so touched by the plight of the children who’d lost their parents and their homes in the disaster that he was determined to help, despite great obstacles. And in an extraordinary operation in the most devoutly Muslim and strife-torn area of Indonesia, his organisation, Youth Off The Streets, was the first to set up an orphanage for local children.

Following on from the bestselling and widely praised Mean Streets, Kind Heart, Sue Williams takes up the inspiring and heartwarming story of Father Chris and his new quest to help some of the world’s most disadvantaged and vulnerable children.

Yet World Beyond Tears is not just the moving story of the children whose lives he’s managed to turn around in Indonesia. Father Chris is now also helping kids in East Timor, the Philippines and eastern Europe while, back home, he’s set up his first shelter for Aboriginal children and is extending his work nationally to help as many Australian kids in need as he can. Father Chris’s ability to overcome enormous odds to help every child he comes in contact with is a testament to his belief in a shared humanity.

For further information about Youth Off The Streets, visit their website: www.youthoffthestreets.com.au.

World Beyond Tears: The Ongoing Story Of Father Chris Riley was published in October 2005 by HarperCollins, rrp $29.95

Sue Williams’ book is dense and gripping. As with her previous biography, she has done Father Riley and YOTS proud.
— The Age 15/10/05

Father Chris looked into the bewildered eyes of the child on his screen and felt all his resolve suddenly crumble. The words ‘back on the streets’ hooked into his mind, and echoed again, and again, in all their hopeless resignation.
— Daily Telegraph 1/10/05

When Youth off the Streets founder Father Chris Riley took his charity to the tsunami-ravaged Banda Aceh in January, he was issued fire and brimstone warnings against converting Muslim children to Christianity. The Catholic priest had nothing of the sort in mind.
— Sunday Telegraph 5/6/05

Father Chris managed to pull off the kind of coup that many before him had tried – and failed. He succeeded in signing an agreement with the world’s second largest Islamic organisation, the Indonesian Mohammadiyah, to set up and jointly run the tented orphanage.
— Catholic News October 05

Ordinary people working together in good faith can overcome any obstacle. What hope does a never-take-no-for-an-answer Catholic priest and his crew of former Sydney street kids have competing with the expertise of international aid organisations in assisting in such a humanitarian crisis? The answer is ‘plenty’
— Catholic Outlook December 05

World Beyond Tears takes in Father Chris’s new challenges abroad – extending his reach to help children in Asia and Europe – and in Australia, where he has set up his first home for Aboriginal street kids, with the emphasis on helping them discover their own cultural past as well as encouraging them to have a stake in their futures.
— Big W December 05 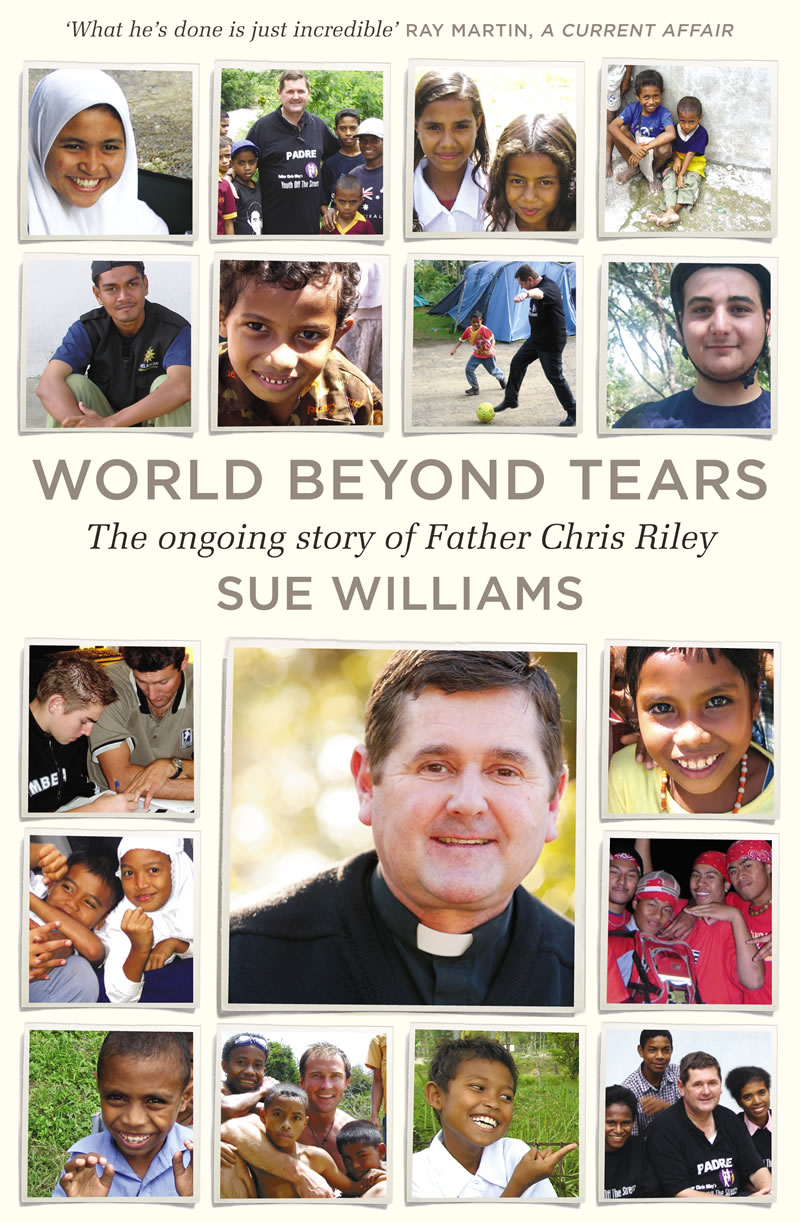