One, the visionary wife of the reforming Governor Macquarie, has grand plans to transform the new colony from a prison into a civilised jewel of the Empire.

The other,  married to Macquarie’s nemesis John Macarthur, is building the Australian wool industry into the economic powerhouse it would become.

Elizabeth & Elizabeth marks Sue’s first foray into full-length fiction and straddles two genres, given that it is based on  both meticulously researched fact and the world of “what if …”

‘We know these women were prominent members of Sydney society in those transformative years in the former colony,’ says Sue.

‘We know their husbands were powerful political enemies and we know that Elizabeth Macquarie was hugely influential in the “civilising” of Sydney while Elizabeth Macarthur was building the Australian wool industry in her husband John’s long and frequent absences overseas.

‘It’s unimaginable that they wouldn’t have met often.  What occurred during those meetings, what was said and unsaid, is what this novel explores.’

Elizabeth & Elizabeth was published by Allen and Unwin in January 2021.

”A fascinating and evocative story of an enduring friendship between two women who played such an important role in colonial Australia’s history.

”An extraordinary story of female leadership at a time when such a quality was frowned on, and female friendship forged against the odds. Sue Williams’ Elizabeth & Elizabeth brings us a nuanced and vivid portrait of the early days of colonisation.
More importantly, it delivers a fascinating look into the relationship between two remarkable women. Williams’ superb characterisation allows the two Elizabeths to take the central place they deserve in Sydney’s fraught past. The book stands as both a compelling novel, and a wonderfully researched piece of narrative history.

Meg KeneallyAuthor of 'Fled' and 'Wrecked', and of The Monsarrat Series with her father Tom Keneally

”Looking for a good book for the weekend? ‘Elizabeth and Elizabeth’, by the very talented Sue Williams, turns the spotlight on two powerhouses of colonial Australia. Elizabeth Macarthur and Betsey Macquarie forged an enduring friendship, despite their powerful husbands’ differences, and each influenced the fledgling colony in their own unique way - and those influences are still woven through the fabric of Australia today. The story also brings a different perspective to some of the decisions made during the 1800s not just in Australia but by British Parliament. A fascinating book and I highly recommend it.

Helene YoungBest-selling author of Return to Roseglen and Shattered Sky

”Williams draws the contours of the friendship with loving lines, and almost without noticing it we learn a lot about New South Wales in the 1810s. But for me as an historian she does something more important than that. Of course, going through the archives I had often felt for the women who lost babies, either as miscarriages or in infancy. But I had never realised why they died until Sue Williams suggested a very likely possibility: syphilis. After Elizabeth Macquarie has been left to mourn yet another child, Elizabeth Macarthur’s friend John Piper tells her that he suspects that the Governor has the illness, because he has seen him take mercury pills, like many of the men of the 73rd regiment ... So, what Sue Williams has done with Elizabeth and Elizabeth is something that almost no author accomplishes: write a book that will keep a general reading audience spellbound and give nerdy historians like me a thrill too. Surely, you can’t do much better than that.

”I loved being immersed in their world and enjoyed the sparks of recognition as characters were introduced with names that were so familiar as suburb names: the charismatic Captain Piper, gifted doctor and former convict, Dr William Redfern, and newspaper publisher William Wentworth, to name a few.
It was so good to see such a pivotal time in Australian history through the eyes of two highly articulate, driven women, who managed to achieve so much, despite the inherent sexism of the time. I was left wanting to know more about almost all of the central characters, and certainly these two women. Fascinating, as well, to acknowledge the parallels with today.
The struggle between reforming emancipists, such as the Macquaries (to whom we owe so much!), and the conservative exclusivists, reminded me so much of the current political landscape. Highly recommended.

”A story of life, loves, friendships and hardships. A story of how hard the world was in the early 1800's and how Sydney was built from nothing.
I didn't know too much about the two women in this book or their husbands and what they did so this really brought home the story of Australia in a factual and fictional way if that makes since! Two strong women, two very different men, two ways of ruling and building a colony and two completely different worlds.
Sue Williams brought the story to life and I love that she told the story from the view points of both women as although their stories were similar they were also very different. A brilliant book, a great story and an enjoyable learning experience as well.

”A story that’s rich in detail and abundant in fact about 1800’s Australian colonial times.
Mixing fact with fiction can work either way but in this instance works rather well.
Taking two historical real figures and blending a friendship that shouldn’t work on paper but does in a complicated time where men think they know best.
A fast paced fascinating plot of historical women who had a part in shaping colonial history.
A compelling and exciting read that will have you captivated by two amazing woman and their experiences.

”If you love Historical Fiction and wish to learn a little about New South Wales, then this really is the perfect book. I loved reading this over Christmas and was a little sad when I reached the last page.

”As much as it is a historical telling of two vastly different women in the early days of colonial Sydney, it is a commentary on the yearning of women to be heard and seen for their own enduring qualities and strengths over the disgraced political legacies their husbands left for them to endure.

”It is refreshing to read about our Australian history from a woman's point of view and to set it in the context of female friendship. I enjoyed the book and learned from it as well ... Elizabeth and Elizabeth is a good read and hard to put down once you start it.

”I really enjoyed this novel. It gave an insight into the lives and friendship of two women pivotal in the colonial establishment and expansion of New South Wales. I particularly liked that the author included an afterward explaining what eventually happened to some of the key characters mentioned throughout the novel. A great read. Highly recommended.

”Seeing the story through the eyes of the two women also gave me a different perspective to the tales we usually hear of the early political and business leaders. Their developing friendship was intriguing as we saw the women supporting each other despite the acrimony between their husbands.
Lastly, the story seemed to be a warning against becoming consumed by power and seeking advantage at the expense of others.
I am left wanting to learn more about "the two Elizabeths" and their contributions to early Australian society, but also wondering how many other women have silently shaped our country.

”I loved this tale of early Australia told through the friendship of two remarkable and courageous women. Sue Williams' descriptions of Macquarie's struggle with political and moral adversaries bring alive the immense difficulties he and his wife faced in trying to forge progress in the barbarous colony.

”have closely followed Sue Williams’ prolific literary career from her first book, Getting There, to her many fascinating, well-researched biographies. Elizabeth & Elizabeth is her first novel, a compelling account of the friendship of two women who played an influential role in shaping Australia’s colonial history. A great read!

”Elizabeth & Elizabeth by Aussie author Sue Williams is a fascinating and insightful story of two women - the strength and determination they both held, to improve and better a fledgling colony. These two women are part of Australia’s history and it was intriguing to read the fictionalized story of their lives and how important they were in the growth of the colony. 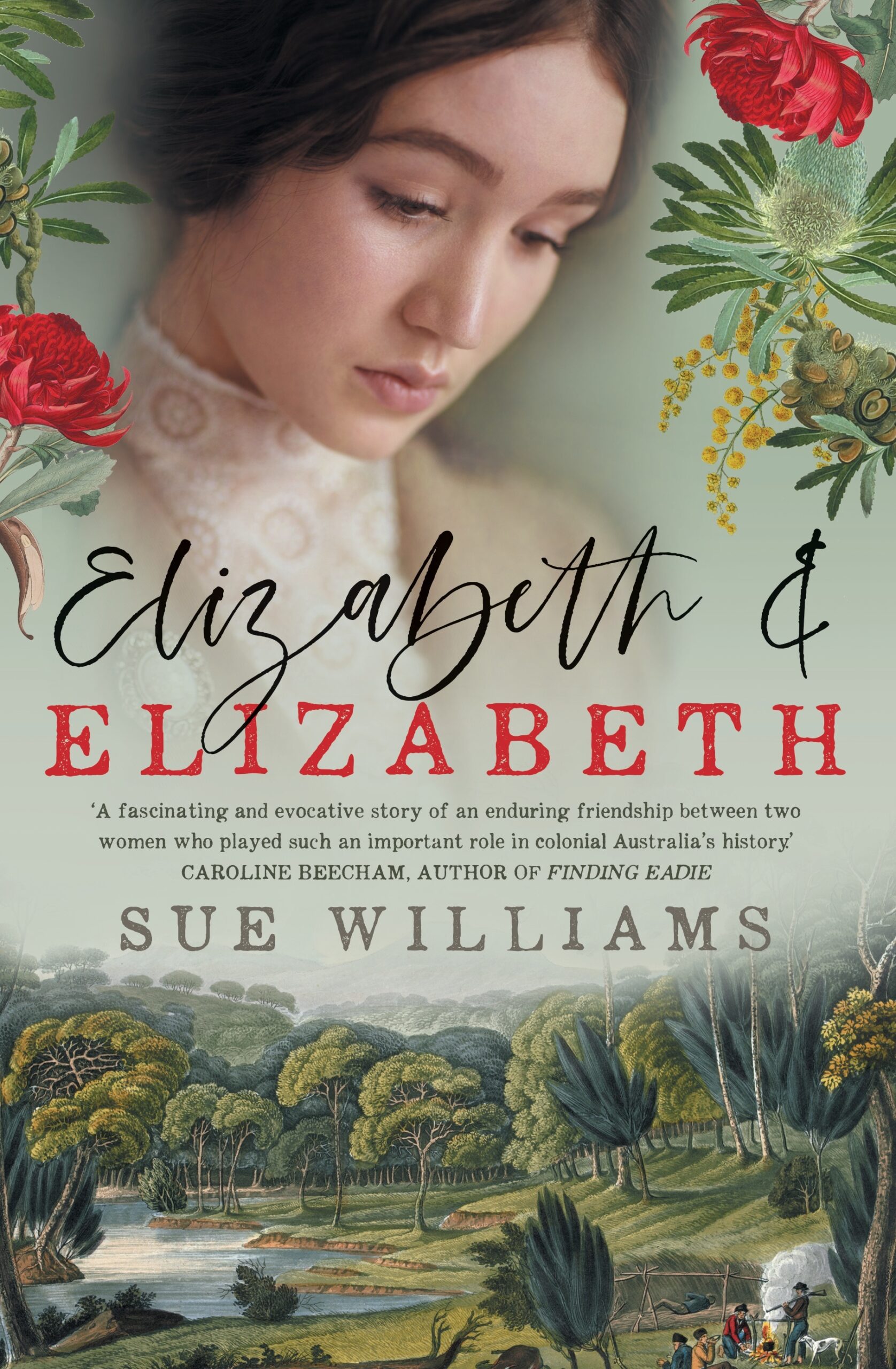 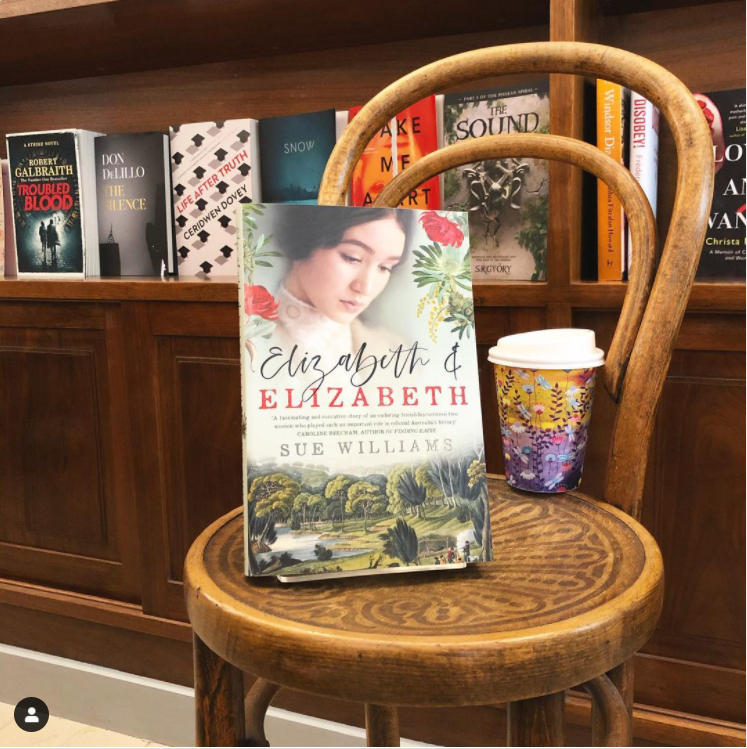 Click on the pic for a nice nod from Ariel Books