Father Bob Maguire is a man of passion, creativity and enormous humour; part Billy Connolly, part angry Old Testament prophet and part compassionate Mother Teresa – although he’d hate any attempt to pigeonhole him, even with heroes.

But he is an intriguingly complex character, both brilliant and flawed, who’s long charmed his followers, irritated his detractors and made many Australians think twice about the role of faith and spirituality in modern society.

His full story has never before been told – he’s spoken of his life before, but only in random pieces for people to put together like a jigsaw puzzle. Sue Williams is the first person to attempt to capture his whole story.

For 39 years, Father Bob was parish priest of Sts Peter and Paul church in South Melbourne. From this base, and through his foundation, he worked, hands on, with kids in need, the homeless, sick, criminal and hopelessly addicted, with both outstanding successes and crushing failures.

In his own words, Father Bob sees his work as a ‘life-long attempt to empower teens, twenty-somethings and even children to be their unique selves … unique contributors in recreating the world and the cosmos’.

Tragically, at the peak of his powers, church bosses forced the 2011 Victorian of the Year to retire, after a Herculean struggle by both the priest and thousands of his fans throughout Australia, to keep him in his job.

But at 78, Father Bob still shows no signs of slowing down, giving in, or shutting up. He continues to operate from a shopfront to conduct services throughout Melbourne, run his charity, help those in need, and use the latest technology to operate a pop-up church in a parish without borders.

“Some people have said I’m a saint; to others, I’m more the devil incarnate,” he says. “I’ve been called the ‘sad’ priest because so much of my work has been with the poorest, most marginalised, most desperate people in Australia today. To some I’m a ‘bad’ priest, because many of my ways of doing things are quite unconventional, although my interpretation of the gospels has always been absolutely orthodox. And to many I might seem, at times, quite mad …”

Father Bob: The Larrikin Priest by Sue Williams was published by Penguin in early May 5 2013, rrp $29.99

What are the new sensations in the book world this coming year?
… for colourful characters in the present, look out for Sean Parnell’s Clive (HarperCollins, August), about Clive Palmer; and Sue Williams’ Father Bob (Penguin, May), about outspoken cleric Bob Maguire.
Jane Sullivan, Saturday Age, December 29 2012

WORTH READING THIS MONTH: Father Bob Maguire is part Billy Connolly, part angry Old Testament propet and part Mother Teresa,. A jobbing parish priest for 39 years, forced retirement spurred him on to work with the homeless, sick, criminal and addicted.
Limelight, May 2013

As a boy growing up poor, with a violent alcoholic for a father, Bob Maguire saw how easy it was to go to the bad, and he made a pact with his friends to stay out of trouble. But this was not the making of a Pharisee. He came to the church of St Peter and St Paul in South Melbourne in the 1970s, just as drugs and homelessness were becoming a blight, and it was here his true vocation emerged.
In a way, he is one of the last extant ’60s radicals – a priest who held fast to Vatican II – and as the church grew more conservative under John Paul II and his local appointees such as George Pell, conflict was inevitable: it was also the conflict between the bureaucratic and the charismatic, which also emerged in the management of the Open Family charity.
Maguire’s way with money gave his enemies something they could exploit, and they did. Being slandered by Derryn Hinch is one thing, but Tim Costello was fair to criticise him for blessing the Crown Casino: it’s not too sniffy to say that the flamboyance could be misjudged. Catholicism is a very theatrical religion anyway: Father Bob was just mixing the style.
And Sue Williams’ cleanly written biography makes clear that behind the showmanship is always the service of Christianity. Williams quotes a letter-writer saying that Father Bob is wrong to think Christianity is all about helping the downtrodden, and strictly speaking, that’s true – but now that social democracy is in retreat, it is also the aspect of Christianity that appeals most to the secular.
Owen Richardson, Saturday Age, May 25 2013-08-21

This is the life story of Father Bob Maguire – a rare behind-the-scenes look at the much-loved ‘people’s priest’. Teh enigmatic champion of the down-andout was shaped buy a lonely childhood in poor circumstances, an early priesthood that collided with Vatican upheaval and working with the army during the Vietnam War. This is a lively portrait of the man behind the resilient social activist and popular media performer who refuses to be defeated by enforced retirement from the parish over which he presided for nearly 40 years.
Mildura Midweek, Mildura, Vic, June 4 2013

One of the quotations at the front of the book on Father Bob Maguire is the famous Edmund Burke line: ‘All that is required for evil to prevail is for good men to do nothing.’ You certainly can’t accuse Father Bob of doing nothing. He has spent his life as a social activist, a champion of Australia’s downtrodden.
Andrew Both, Burnie Advocate, April 27 2013-08-21

On Thursday, Father Bob will preside at the launch of the book Father Bob: The Larrikin Priest by Sue Williams at the Australian National Academy of Music at the South Melbourne Town Hall. Blessed is the priest who has another bible written about him.
Suzanne Carbone, The Age, Melbourne

The former South Melbourne parish Catholic priest and founder of the Father Bob Maguire Foundation said he would probably be barred from public speaking after the May 2 release of his biography by Sue Williams. Father Bob gave an irreverent, frank, unscripted speech about the importance of community, helping each other out and putting belief into action to help people in need.
Moorabool News, Moorabool, May 7 2013-08-21 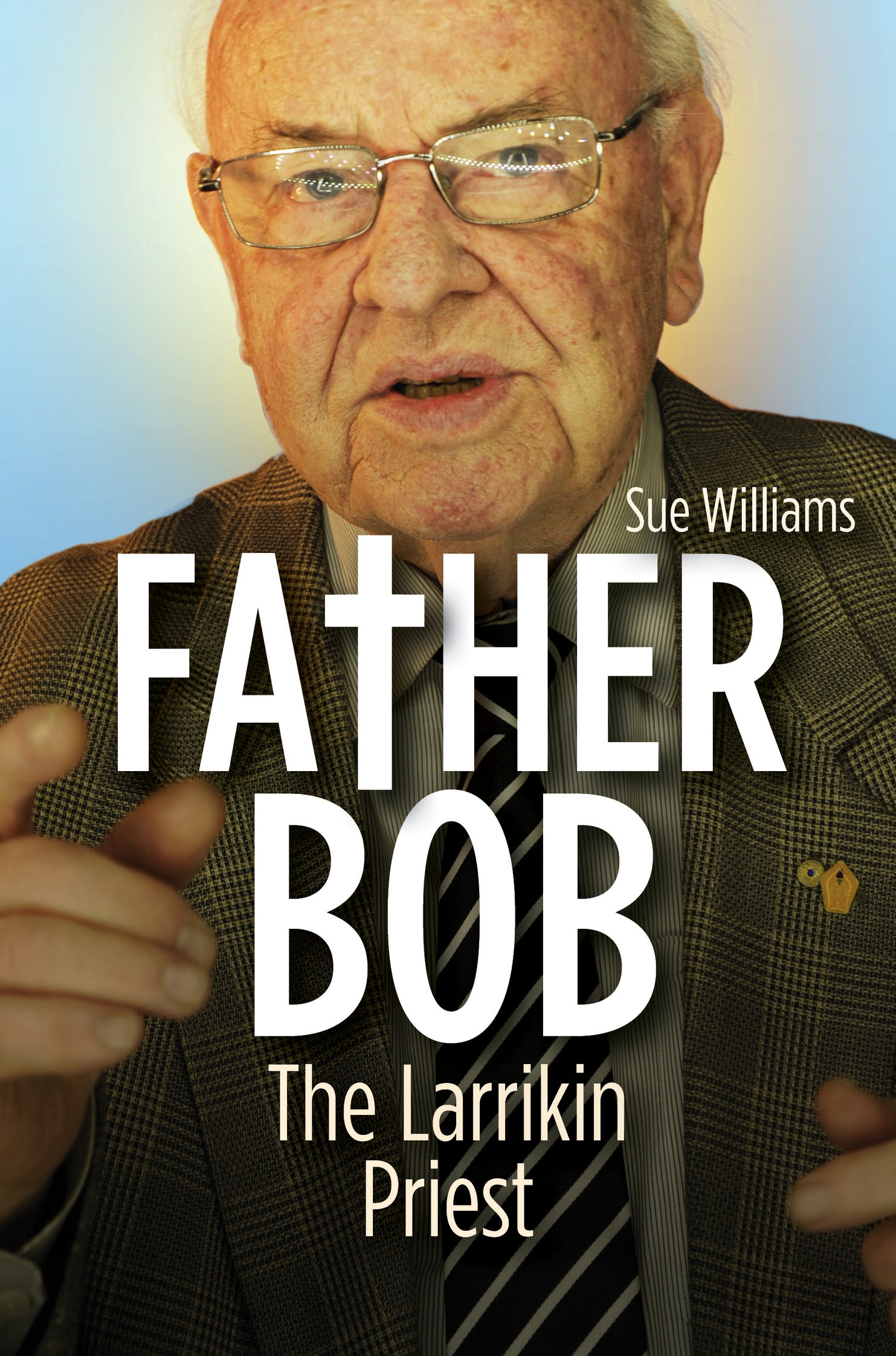