Growing Great Kids contains everything anyone ever needs to know about how to bring up wonderful children, and help them to reach their full potential. It talks about a baby’s need for close physical contact from a parent or carer from the moment of birth, to the right way to deal with teenager crises and provides priceless advice for guiding a young person into independent adulthood.

In an unflinching treatise on the needs of both kids and everyone around them, Australian legend Father Chris Riley explains every aspect of childhood behaviour, the dangers and the joys. It crosses from teaching children good habits about diet, exercise and healthy living that will stay with them their whole lives, to building their emotional resilience and confidence.

When things go wrong, Father Chris is also there to provide a clear path through the problems, whether they involve alcohol and binge-drinking, drugs, bullying and cyber-bullying, violence, sex, sexual abuse, depression, eating disorders or family difficulties. Throughout the book, he illustrates his points with lively real-life anecdotes of the children and young people he’s helped through such trauma.

Then there are the lessons for us all, from the four pillars of positive parenting to the Six Secrets of Growing Great Kids. His wisdom will be an invaluable aid, and comfort, to anyone who ever has anything to do with kids, from parents, grandparents, aunts and uncles, to youth workers, teachers and those in the community who care about the welfare of our next generation of Australians.

Father Chris is speaking from a huge base of knowledge, having brought up about 150,000 kids – and some with the toughest problems imaginable. Through his work with his charity Youth Off The Streets he’s helped youngsters with every conceivable hurdle, and helped them grow into confident, happy and self-aware young people.

Now Growing Great Kids contains all the lessons he’s learned from 40 years of working with kids, and studying all the research on children, to provide a must-have guide for anyone who has anything to do with kids, or ever was one. He talks frankly and clearly about what we all need to know to make sure the next generation grow up as healthy, confident and compassionate people themselves.

Father Chris Riley has twice been runner-up for Australian of the Year and was the first Australian to win the Lions Club International Humanitarian Award, following in the footsteps of Mother Teresa, former US President Jimmy Carter and Nobel Peace Prize winner Muhammad Yunus.

”Nelson Mandela once said that a good head and a good heart are always a formidable combination and in this must read book, Father Chris proves it. The book contains a remarkable combination of experience and wisdom that every Australian parent needs. This Australian Icon's insights into the psychology of young people at risk are simply awesome.

”Thank God there is someone like Father Chris Riley around who cares about kids and is there when they need him ... A little guidance at the right time can change someone’s life. Children are our future and every kid deserves an even break.

“When I was on the Fun-house Tour back in 2009 I read a story in the Sunday papers about Youth Off The Streets. I totally related to it because I could have been one of them. I first met some of these kids on that tour and when I came back last year I met more of them at my Sydney concerts. It made me want to further support this great organisation and give these kids a fighting chance.”

”Growing Great Kids is the one book all parents - and their kids - should have on their shelves. It will prove a priceless guide through the maze of childhood and adolescence for both parents and their children and, with so many real life stories to tug on the heart-strings, the kind of gripping read no one will be able to put down. 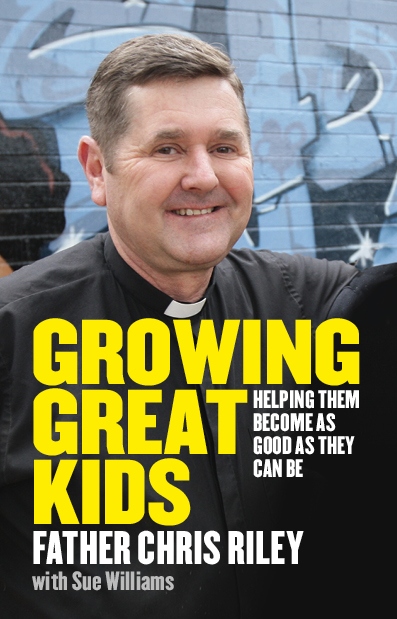